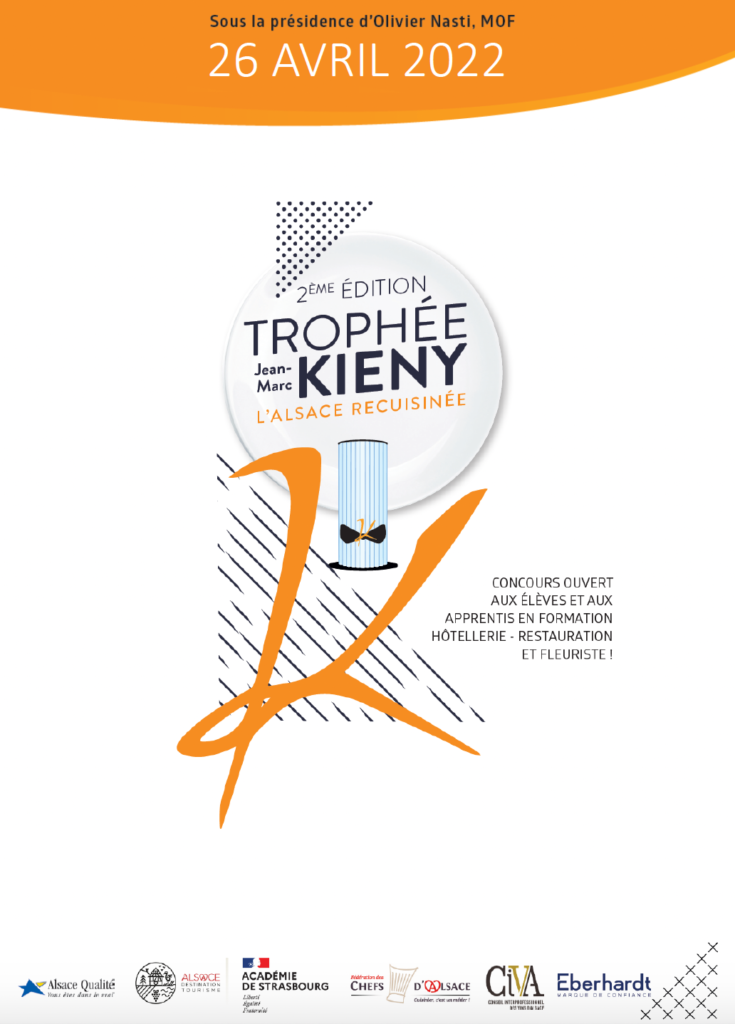 The 2nd edition of the Jean-Marc Kieny Trophy took place on Tuesday, April 26th at the Haut-Kœnigsbourg castle!

Created in 2019, the competition was launched in honor of Jean-Marc Kieny and is open to students and apprentices in hotel and restaurant and floristry training. It aims to highlight our Alsatian region and its products.
This year, the jury of professionals was chaired by Olivier Nasti, Meilleur Ouvrier de France, two Michelin stars and a close friend of Jean-Marc Kieny. 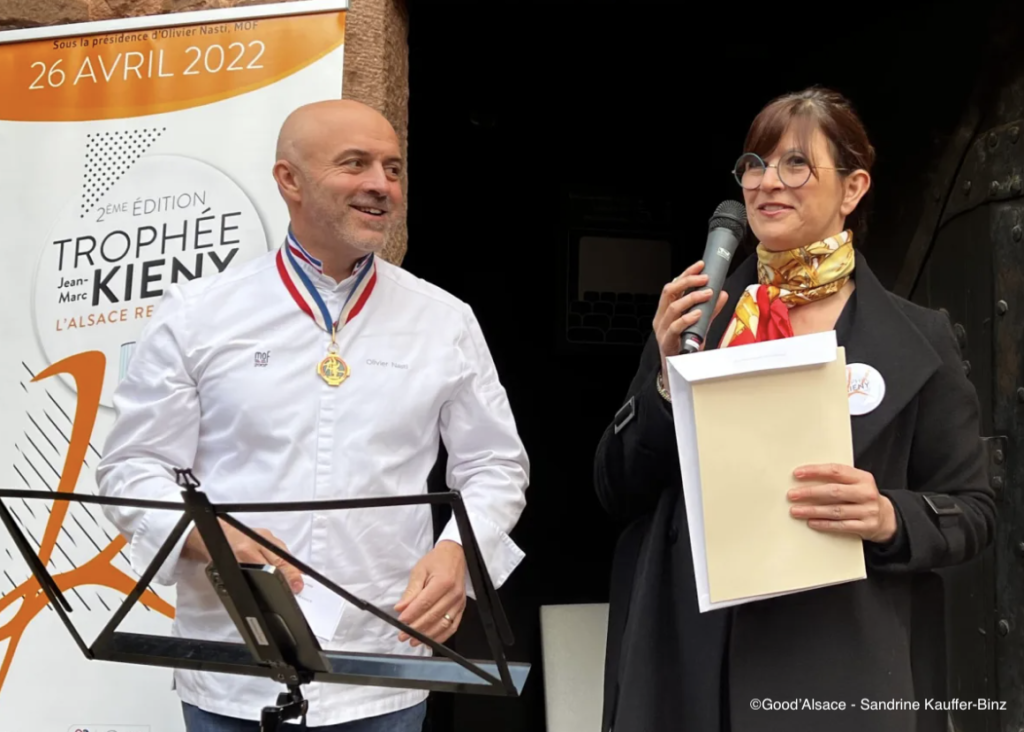 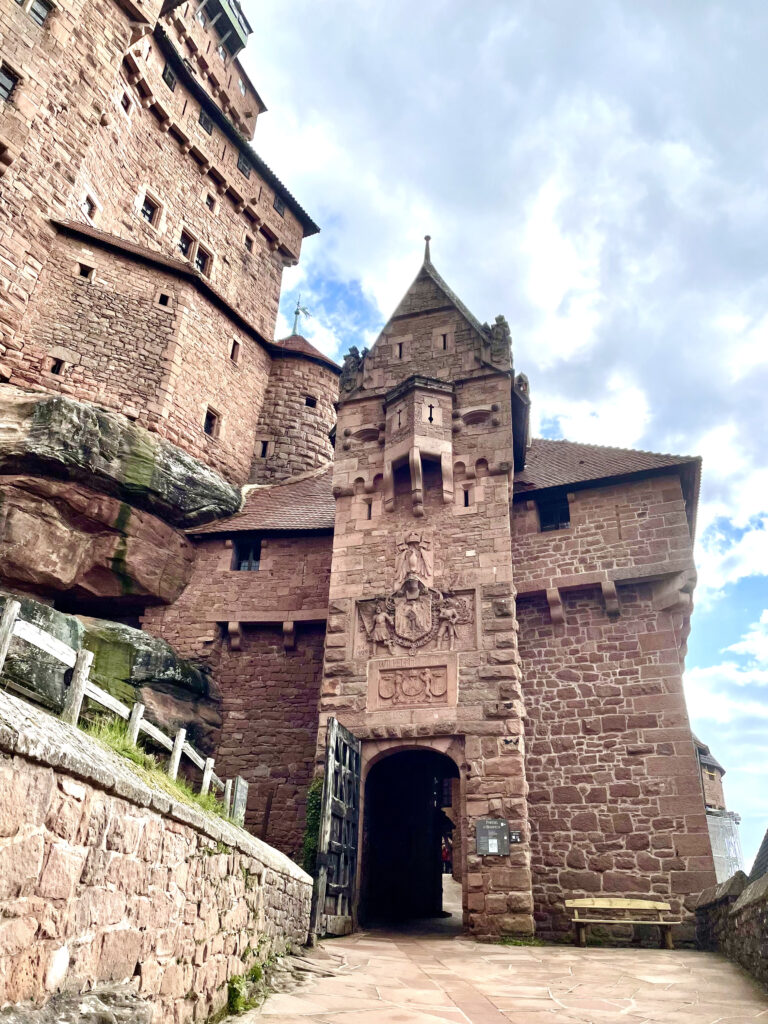 The concept of “Alsace recuisinée®” imagined in 2016 by Jean-Marc Kieny, former President of the Association des Étoiles d’Alsace, and taken up since then by the chefs and master craftsmen of the Étoiles d’Alsace, aims to celebrate regional products, by introducing innovation, audacity and fantasy in their preparation, thus demonstrating that the terroir can be resolutely modern.
The Jean-Marc Kieny Trophy is therefore an opportunity to pass on the taste for Alsatian products and heritage to the next generation. 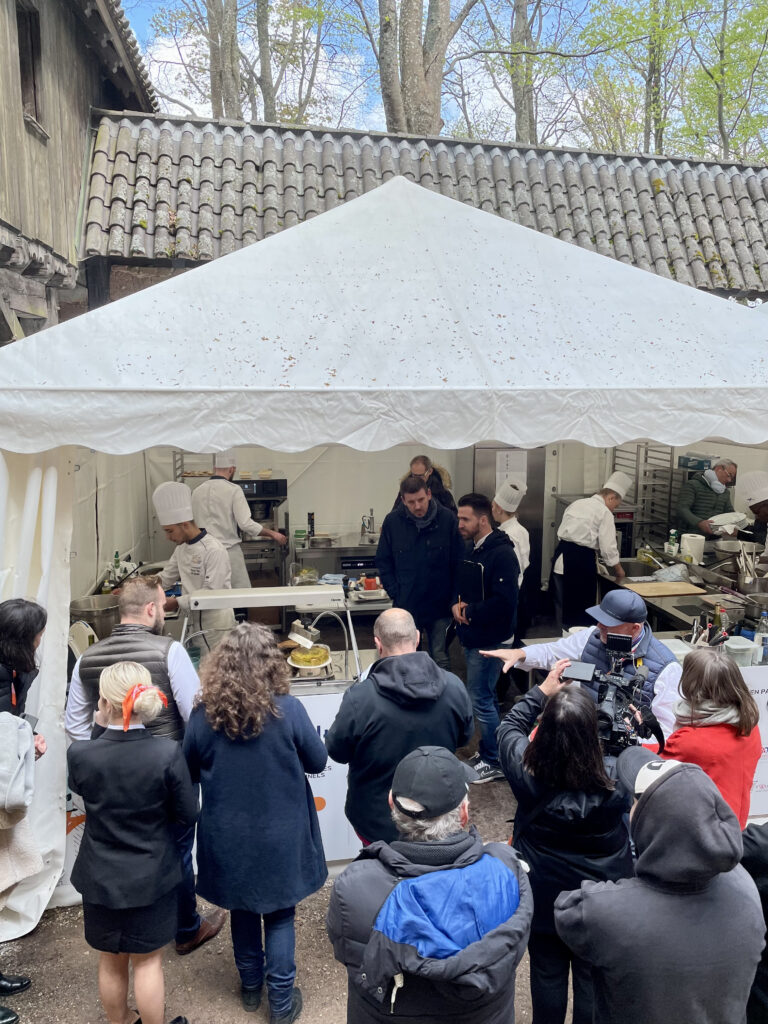 The brigades observed by the jury in the kitchen

A competition for young people in training

The 5 teams in the running, made up of 5 candidates (maitre d’ and his assistant + chef and his assistant + the florist) are considered as ambassadors of their establishment and their territory. Through their technical skills, their professional and relational ease, they have the capacity to sublimate this moment of sharing spent around a table. 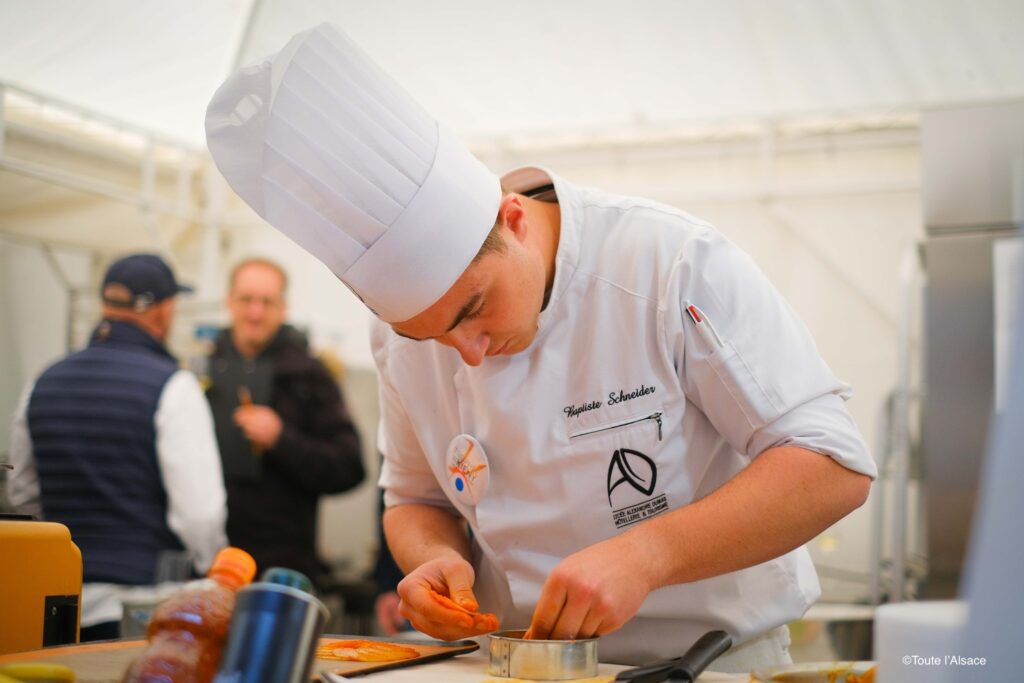 A jury of professionals

The candidates were judged by professionals of the gastronomy: Alsatian Chefs, professionals of the agriculture, the arts of the table and tourism. The two Michelin starred Chef and Meilleur Ouvrier de France, Olivier Nasi, has done the honor of being the president of the jury for this 2022 edition. 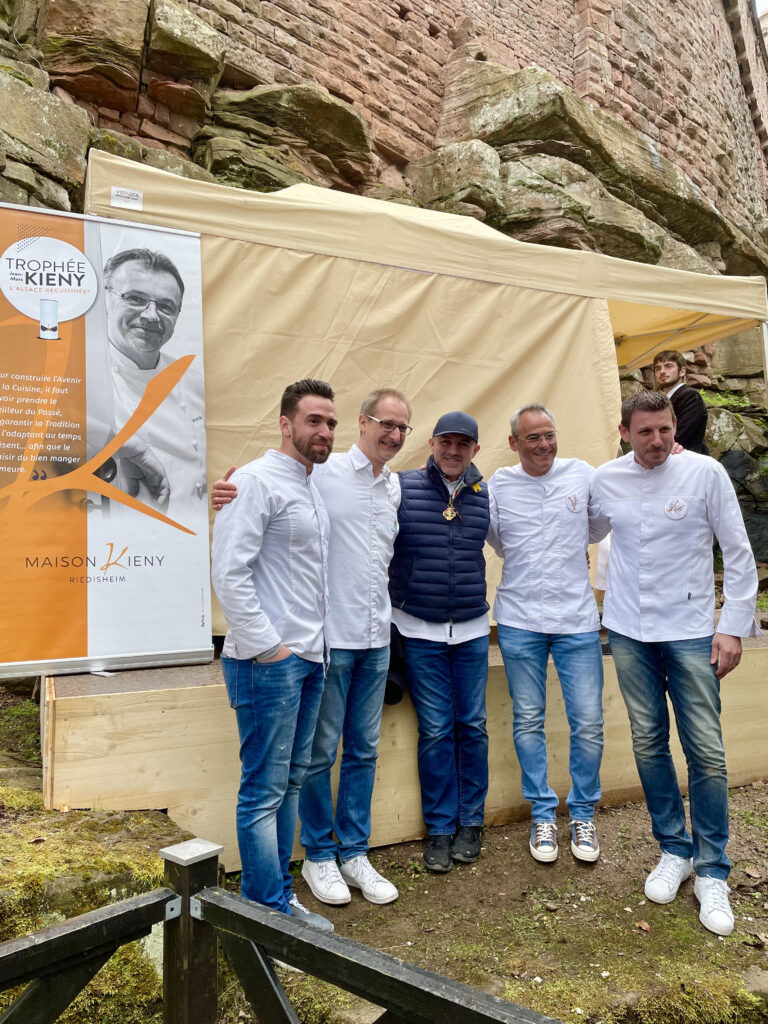 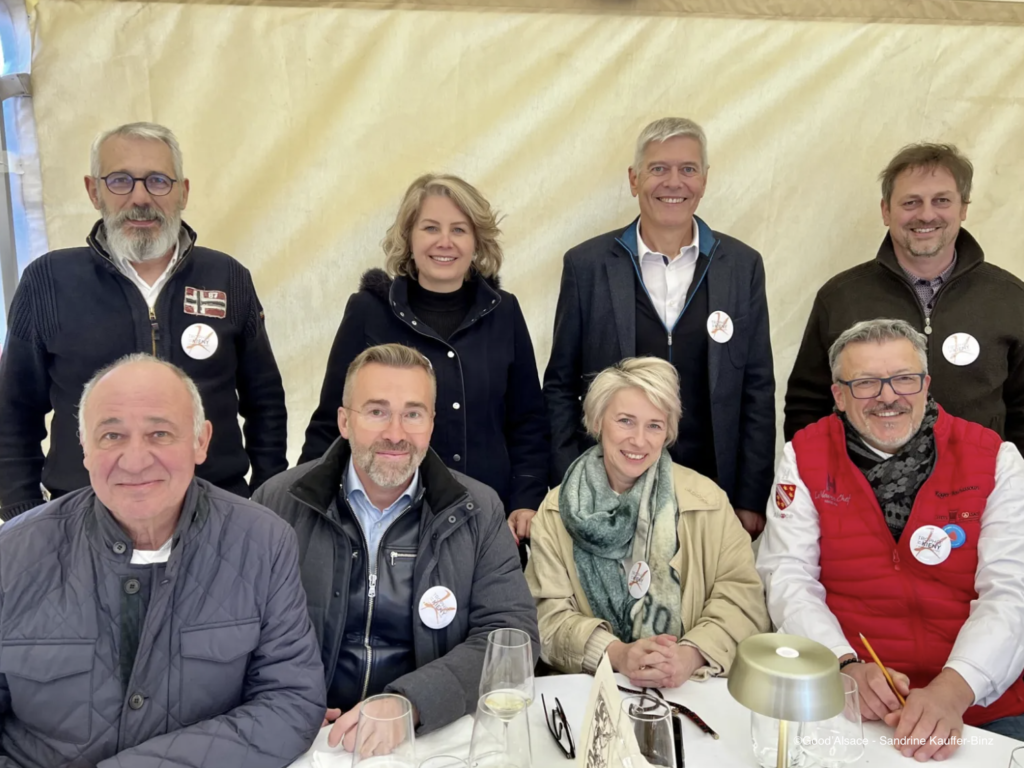 The teams competed on the following theme: trout from the Heimbach fish farm cooked with beeswax, stuffed cabbage, riesling sauce.

Candidates had to develop and market their dishes and then serve them at the pedestal table. The dishes had to be made from a basket of imposed products under the brand ” Savour Alsace Produit du Terroir ” or under the official sign of quality Bio or IGP.

This basket was composed of the following products:
– A trout from the Heimbach fish farm
– A stuffed cabbage, its stuffing composed of pork belly, carrots, celery, eggs, horseradish, onion, sauerkraut from Alsace
– A wine from Alsace, of Riesling grape variety

It was also a question of proposing an appropriate food and wine pairing from a selection of 4 wines proposed by the Comité Interprofessionnel des Vins d’Alsace (CIVA). Teams were free to select a wine that matched the food and to prepare a sales pitch.

Finally, the tableware was also honored by offering a floral table decoration. 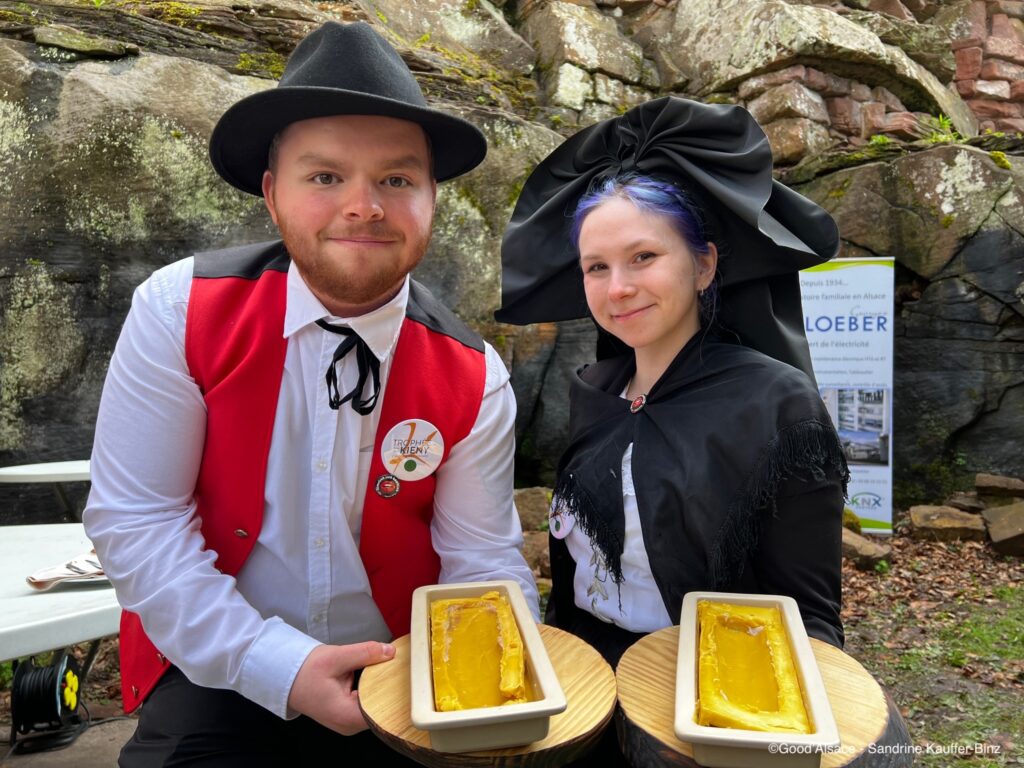 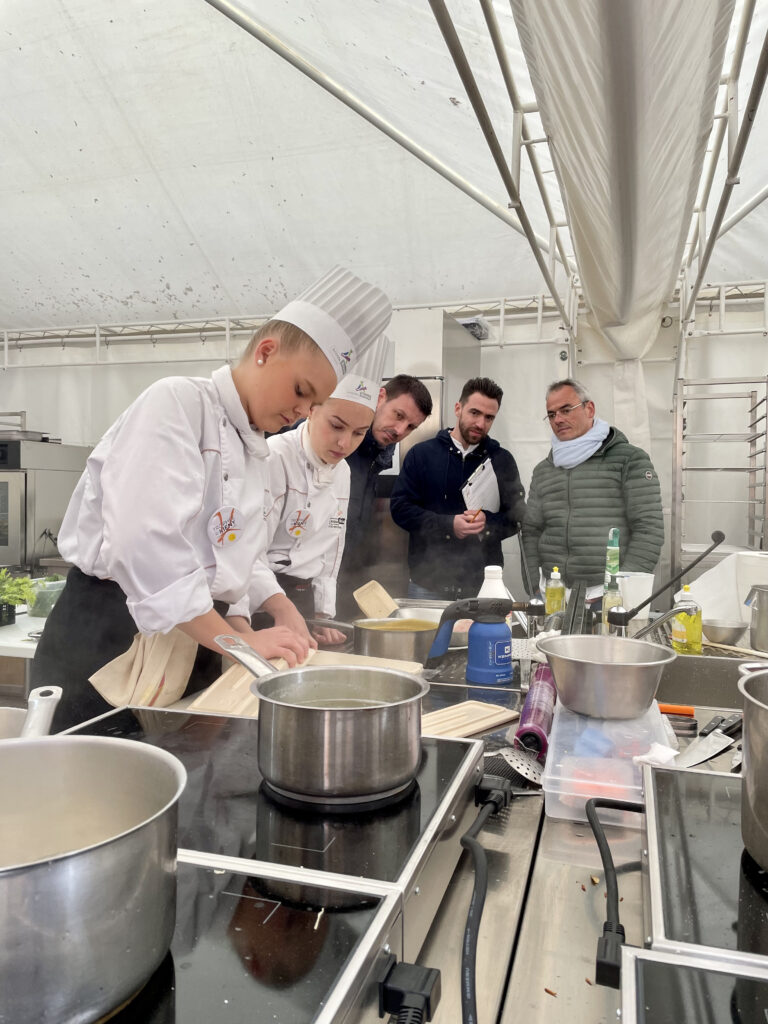 Some of the jury members cook under observation 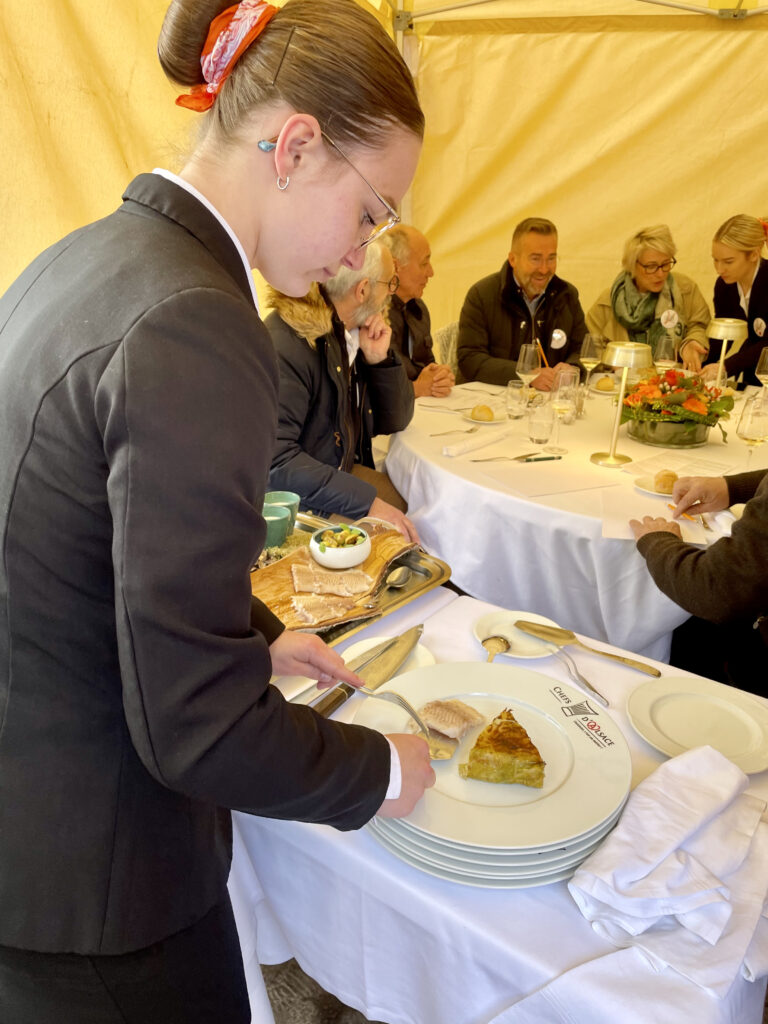 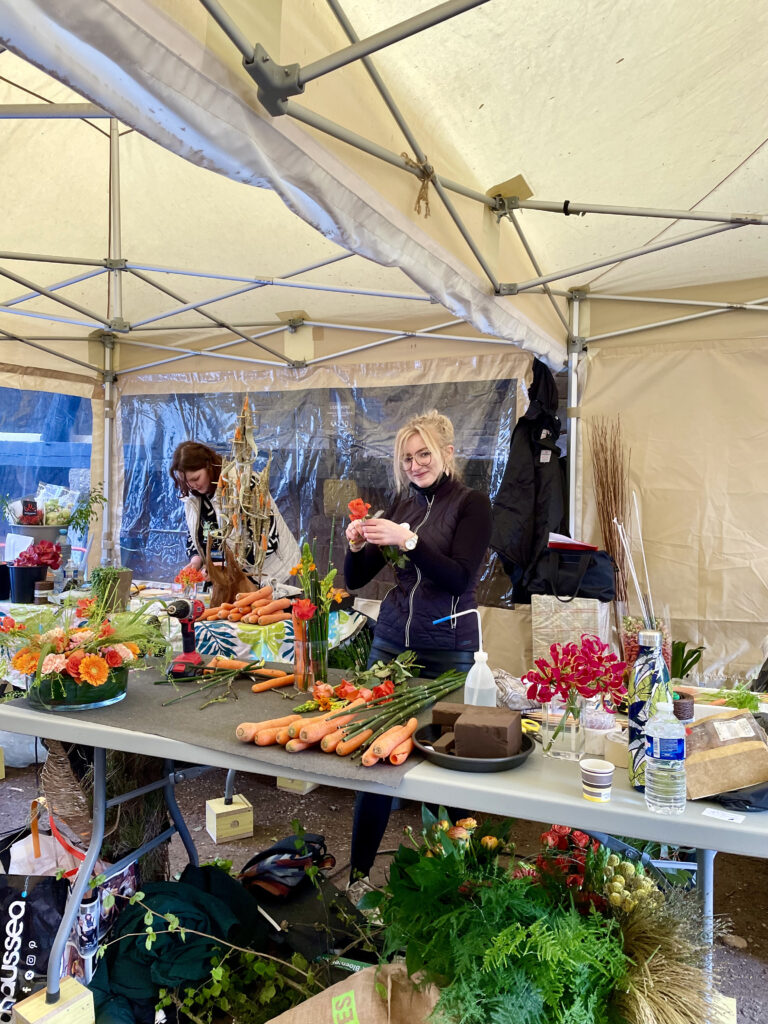 The Office pour la Langue et les Cultures d’Alsace et de Moselle (OLCA) has joined this year the partners of the Kieny Trophy. This new partnership shows that our Alsatian heritage has its place in the fields of excellence that are gastronomy and table arts. It is also a way to promote the language and culture to the youngest who will be the actors of the Alsatian gastronomy of tomorrow. 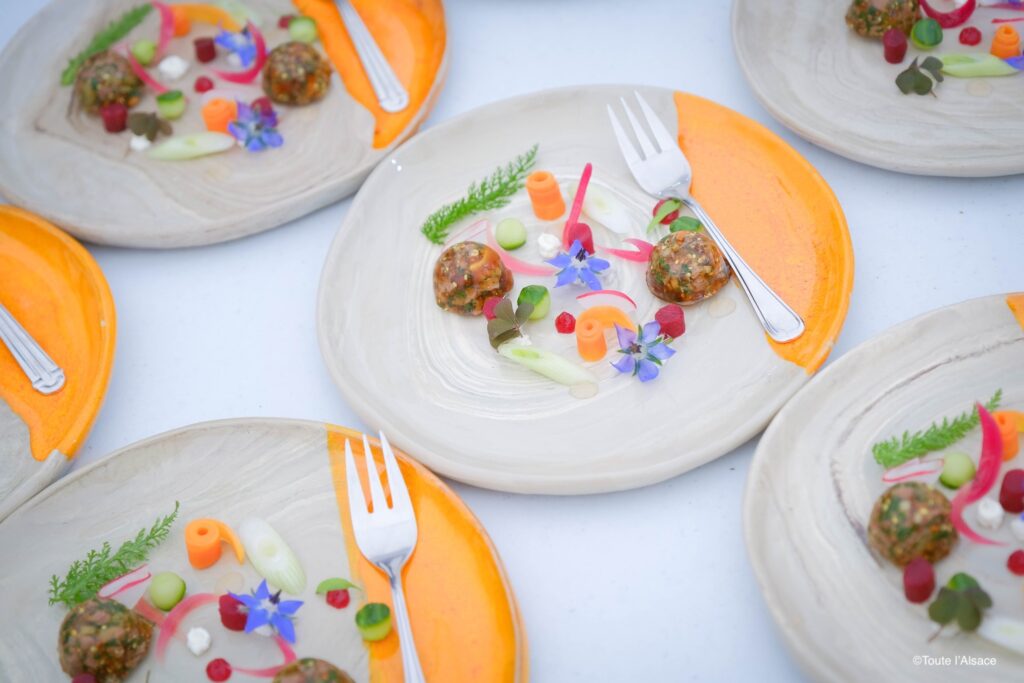 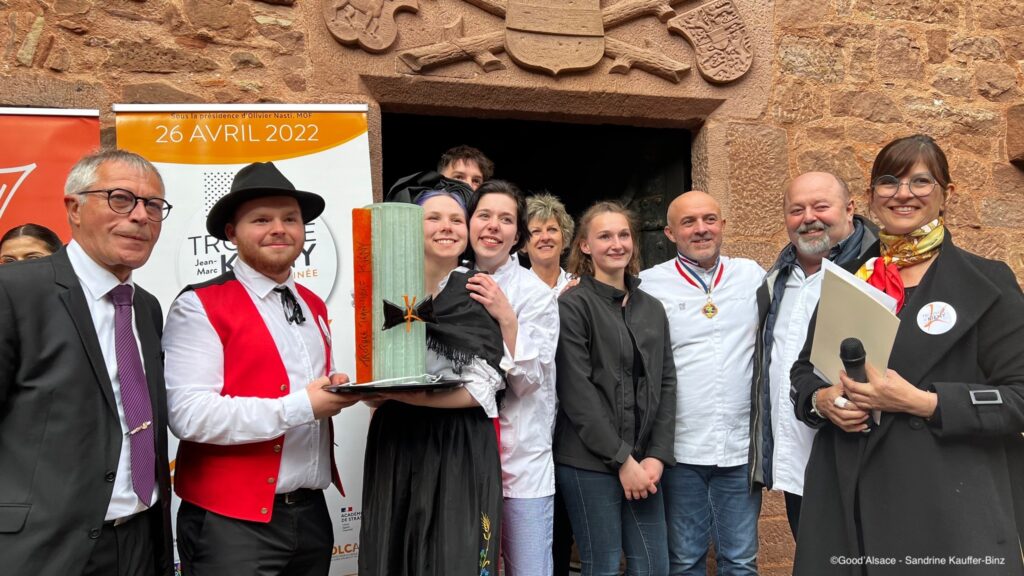 OLCA award for the Alsatian appetizer 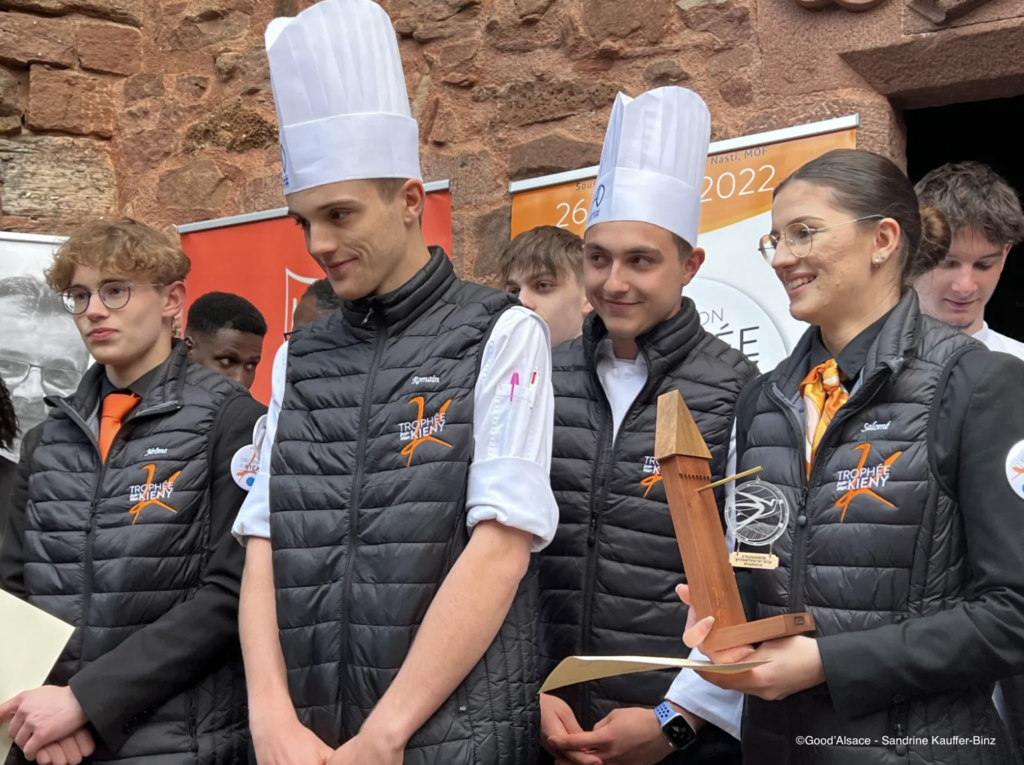 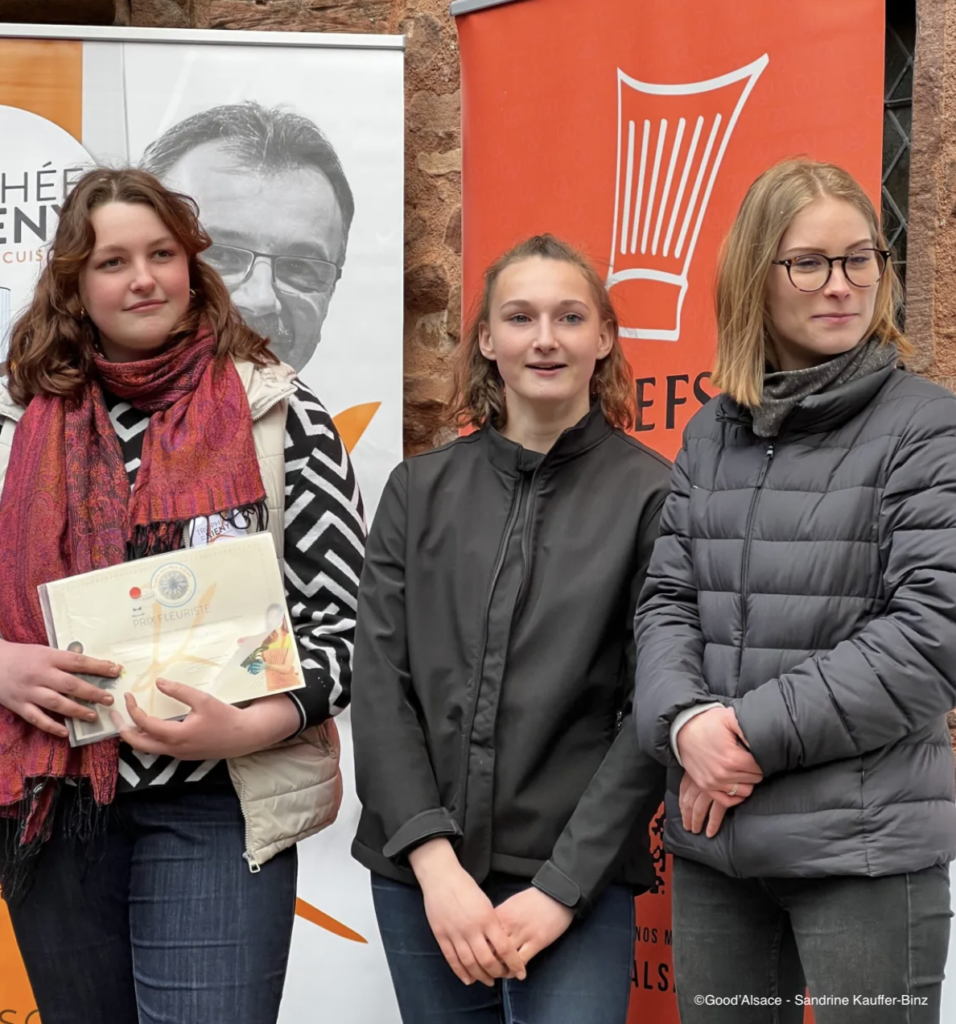 A big congratulations to all the teams who have done a remarkable job in honoring “l’Alsace recuisinée®”!

Thank you to the schools, the members of the jury, the partners, the media and all those present for this beautiful day in tribute to Jean-Marc Kieny! This new edition has once again demonstrated that the Alsatian terroir represents a real wealth in the gastronomic landscape and that it is important to transmit it to the new generation!

You can also read the article in the Gastronomic News > https://nouvellesgastronomiques.com/2eme-edition-du-trophee-jean-marc-kieny-presidee-par-olivier-nasti-2/